You are here: Home / Events / Yodan Uchi with Yuta Kato

$65
“Yodan Uchi,” which means hitting on 4 levels, was originally composed by Yoshihisa Ishikura, Yutaka Ishizuka, Seido Kobayashi, and Motoei Onozatoone of one the first kumidaiko groups in Japan (Sukeroku Taiko of Tokyo, formed in 1959). This exciting and dynamic piece, in which the players hit on all 4 drum heads, has become one of the most popular in the taiko world today.

In this workshop, Yuta will cover naname and 2-drum exercises and drills that are essential to playing Yodan Uchi well. He will also introduce patterns for you to use as starting points for your own arrangement.

Previous naname (the style of playing on a slanted stand) experience is required for those who wish to take this workshop.

After training for 3 years in Japan, Yuta Kato was granted permission to teach Yodan Uchi by one of the founders of Sukeroku Taiko, Motoei Onozato. 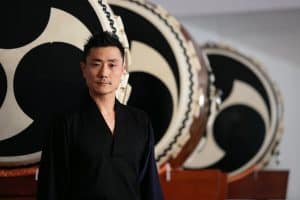 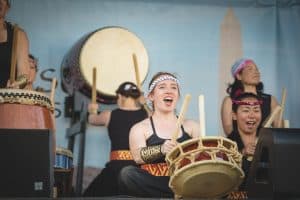 I was a shy kid who rarely raised my voice, even on the playground, yet as … END_OF_DOCUMENT_TOKEN_TO_BE_REPLACED